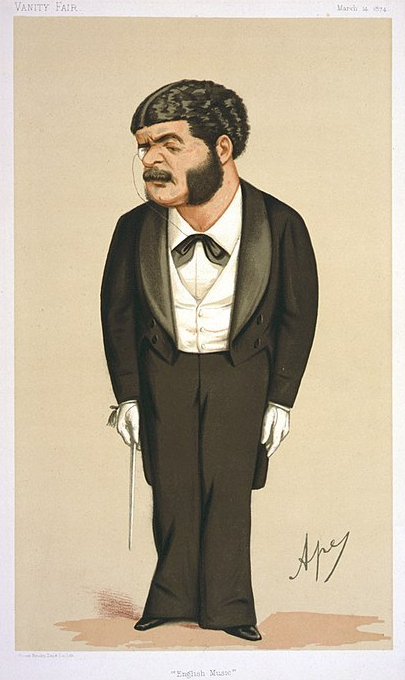 A cartoon of Sullivan, first published by Vanity Fair in 1874

If you know anything of the composer, Arthur Sullivan, it will almost certainly be from his partnership with W.S. Gilbert. That series of 13 comedic, satirical operas the two men collaborated on still feature in the repertoire 150 years on. The Savoy operas’ combined commercial and artistic success has overshadowed the rest of Sullivan’s varied output for almost the same length of time.

As a student graduating from the Leipzig Conservatoire, his final work in 1861 was a suite of pieces for Shakespeare’s The Tempest. This calling card did him well; a performance the following year in the Crystal Palace marked him out as a composer to watch. From this came his first commission, Kenilworth. END_OF_DOCUMENT_TOKEN_TO_BE_REPLACED

Most of us are very familiar with summer music festivals, and benefit concerts. This is the tale of a benefit festival which lasted for over a century and involved some of the major British and European composers of the nineteenth and early twentieth centuries.

In the second half of the eighteenth century, the town of Birmingham was expanding rapidly. The free thinkers and scientific explorations of the Lunar Society , the canal expansion, and the explosion of manufacturing drew in large numbers of people. One important facility in the town was the General Hospital. This wasn’t funded in any way by the government of the day, but instead, relied largely on charitable donations. This was where the Triennial Festivals came in.

END_OF_DOCUMENT_TOKEN_TO_BE_REPLACED

Learn more about art and stay updated with RBSA news.

Bringing classical music closer to you