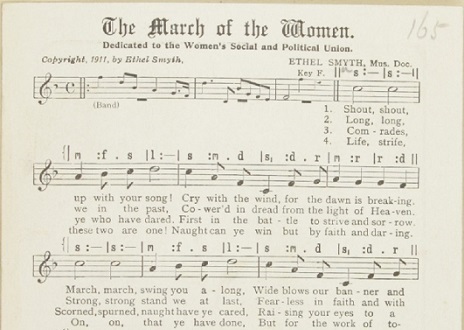 'March of the women' - opening

‘March, march, swing you along’ – Ethel Smyth’s life and music

A while ago, I wrote our sole post about a female composer: Pretty as a picture? Songs by Liza Lehmann . It’s high time we had another one, so this time I chose to look at Ethel Smyth.

As well as being composers at the start of the twentieth century, both women were members of the Society of Women Musicians . Since I posted the first essay, the fascinating linked article by Sophie Fuller came to light.  About the same time as the Society was formed (1911), Ethel Smyth was also heavily involved in the militant suffragette movement, Women’s Social and Political Union . When a call for direct action went out, Smyth responded and ended up serving two months in Holloway Prison.

Although we don’t stock this unfortunately, it’s impossible to bypass. The song became the anthem for the WSPU under its leader Emmeline Pankhurst. It has interesting parallels with an earlier song for the socialist movement with words by William Morris which we looked at in ‘All for the cause’ – the labour songs of William Morris. Smyth’s song only cost one penny (though admittedly it’s only a voice part); twenty years’ earlier, Morris’ cost five pence.

Here’s part of the first verse:

Shout, shout, up with your song! Cry with the wind, for the dawn is breaking. March, march, swing you along, Wide blows our banner and hope is waking.

Smyth didn’t shy away from writing large-scale works: The Boatswain’s Mate was her fourth opera. However, venturing into the exclusive territory of male composers was tricky. The Wikipedia article quotes Eugene Gates with the following:

Smyth’s music was seldom evaluated as simply the work of a composer among composers, but as that of a “woman composer.” This worked to keep her on the margins of the profession, and, coupled with the double standard of sexual aesthetics, also placed her in a double bind. On the one hand, when she composed powerful, rhythmically vital music, it was said that her work lacked feminine charm; on the other, when she produced delicate, melodious compositions, she was accused of not measuring up to the artistic standards of her male colleagues.

The overture to the opera, a comedy, quotes The March of the Women very clearly. Give this piano reduction a try and listen out for it:

In his biography of Smyth, Christopher St. John quotes her after conducting a performance of the overture at the Proms in 1921:

Had an immense reception, and four [curtain] calls and an ovation afterwards. The amusing thing is that whereas last time I conducted, the Press elected to say I couldn’t conduct, they now praise my conducting! All one has to do is to go straight on and pay no attention, when, as in this case, it’s a sheep-movement started by a cur-dog.

It’s not noted who the ‘cur-dog’ is… Later in her life, Smyth wrote numerous volumes of memoirs. This is doubtless a quote from one of them.

As we explored in an earlier post about Holst, A Journey beyond ‘The Planets’ , the 1920s were a time of experimentation when it came to mixing genres. With Fête Galante, Smyth joined in, composing what the title page describes as a ‘Dance dream in one act’. In 1923, the first performance was given in Birmingham at the Repertory Theatre under the directorship of Barry Jackson . Performances of the Boatswain’s Mate ran concurrently. Here’s what St. John quotes Smyth as writing:

17 July 1923: Fête Galante and Bosun put on for a fortnight at Birmingham by Barry Jackson. Those who went adored it, and went again and again. But if 5 people go 8 times that does not spell financial success. I conducted the first three shows. The local conductor, furious at my conducting, did all he could to spoil things. Excellent press.

The scene is described in the vocal score as being ‘a Watteau garden in bright moon light’. The early eighteenth century feel is continued in the music with a minuet, sicilienne, and madrigal amonst others.

Birmingham continued its relationship with Smyth: in 1924, there was a revival of a much earlier work, Mass in D.

29 March 1924: … the glorious resuscitation of my Mass at Birmingham on February 7, so timed as to follow a most important article by me in the London Mercury called ‘A Burning of the Boats’. … Anyhow it is good to get the truth off my chest about the sort of contest my life has been. The Mass was beautifully sung, but execrably accompanied by the Birmingham Orchestra. (The trombones are policemen!)

Unfortunately, there’s nothing to hear from Fête Galante, but Retrospect Opera is preparing a new recording, having previously done the Boatswain’s Mate. Smyth has vigorous supporters nowadays for her music as a female composer, and as a member of the LGBTQ community. Maybe one day, she’ll be able take her rightful place simply as a composer, amongst all others.